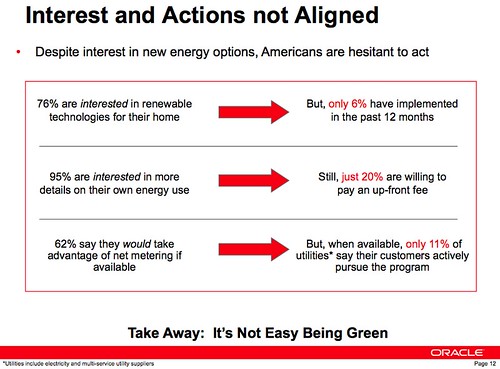 The report had some interesting findings – from the press release:

Americans are concerned about energy costs and show interest in new energy options.

Other interesting findings include:

This clearly demonstrates a communications issue between the utilities and their customer base.

While on Smart Grids –

There is a lot of interesting information to digest in this report – mainly though it is good news. The American people want more information on their energy use, they are interested in renewables and microgeneration. The renewables, for their part, believe that rolling out smart grids is critical, provide net-metering programs but don’t, as yet, provide detailed useful information on energy consumption in their bills.

Both sides perceive the biggest obstacle to the rollout of smart grids is financial.

Let’s hope that the $11bn pledged to the implementation of smart grids by the Obama stimulus plan will break down some of these barriers.

I hope to be interviewing Guerry Waters, vice president, industry strategy, Oracle Utilities about this report in the coming weeks, if you have any questions you’d like me to put to Guerry, please feel free to leave them in the comments.

There have been several big announcements on research into Green and renewable energy technologies recently.

MIT announced that they had announced a way to split water into H2 and O2 at room temp and pressure using simple, easy to produce and dispose of catalysts. The thinking on this being that if you have a photovoltaic array on your roof during the day, you can use excess electricity generated to create hydrogen and water. These can be combined subsequently in a fuel cell to create carbon-free electricity (when the sun goes down, for example). This has the potential (no pun) to make the generation of solar energy far more efficient, it is claimed.

Then Technology Review reports on a recent paper in Science from Jacobo Santamaria, of the applied-physics department at the Universidad Complutense de Madrid, in Spain, and his colleagues which could help make solid-oxide fuel cells more practical. Previously these fuel-cells required a lot of heat but this new super-lattice material ‘improves ionic conductivity near room temperature by a factor of almost 100 million!

Then the University of Virginia released news of a breakthrough in solar cell design which should lead to increases in photovoltaic array efficiency. From their report:

Solar cells of the future may look totally black to the human eye because they absorb light so efficiently.

While current solar cells reflect about 30 percent of the light energy that reaches their surface, the U.Va. team will use lasers to create tiny nanoscale surface textures that reduce that energy loss to less than 1 percent, over the entire solar spectrum and irrespective of the angle at which sunlight strikes the cell.

It is fantastic to see such innovative work taking place in the area of Green and renewable energies. There is absolutely no doubt in my mind that the current wave of announcements is being helped enormously by the increase in the price of oil.

If the price of oil were to drop below $100 per barrel, the vast majority of these projects and startup companies in the renewables area would bery quickly find their funding drying up. I have said it before, the sooner oil reaches $200 per barrel, the better.