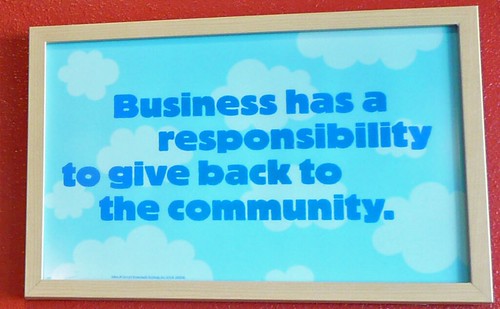 I was asked on Twitter recently where to find a list of links to tech companies’ CSR reports.

I didn’t know where to find one, so I built one and as well as just the links, I also added in a few extra observations I noted about the reports.

As previously reported here, the 2009 SAP Sustainability Report is superb.

Another company in the list worthy of note is BT, whose report, despite the lack of interactivity, is the only other report to hit the GRI A+ rating.

HP’s site has gone heavy on design to the detriment of usability which is unfortunate because some of the content is really good.

After that, almost all of the companies who have a 2009 report published have done a really good job. The exception to this is Microsoft whose 2009 report, while an improvement on previous reports, still has a long way to go to approach a professional CSR Report standard.

Of the companies who have yet to publish their 2009 report, Oracle and Adobe’s 2008 reports are lacklustre attempts, at best. Neither report to GRI standards and both are long on pretty pictures and short on relevant data.

Having said that, at least Oracle and Adobe are producing Sustainability reports.

The three laggards in this list are Google, Amazon and Apple – none of whom are producing sustainability reports at the minute.

In their defence, Google has its Going Green at Google website and Apple has its Apple and the Environment site, both of whom go into considerable detail on each companies initiatives. In Apple’s case, it does go deep into a lot of the data you would normally see in a Sustainability report. Why it refuses to produce a formal report is beyond me.

In contrast, Amazon’s attempt at an Environmental site/page is an embarrassment. If this is the best they can do, honestly, they’d be better off doing nothing.

One issue I noted was that HP, Cisco and Apple [PDF] all report on sourcing 100% renewable power in Ireland. This is not possible for the reasons I outlined in this post.

What other companies should I add to this list? Please feel free to suggest any in the comments and I will update the list.

UPDATES:
Since publishing this, Nokia have brought out their excellent 2009 report and it is now included above.
Also, based on suggestions received on FaceBook I have added details about 3 other companies (NEC, Fujitsu and Indra Sistemas). It was also suggested there that I go over various telco companies CSR reports. I’ll leave that to a separate post.

As you probably know by now, we’re very interested in the idea of what might constitute a green API or protocol, so I was very interested when I received a link via twitter from @Straxus (Ryan Slobojan).

The Aon Scéal? (That’s Any News in Gaelic) blog by Alastrain McKinstry points to this piece by Yves Poppe which argues that IPv6 could save 300 Megawatts.

Easy to forget that most mobile devices used by Time Square revelers were behind IPv4 NAT’s and that always on applications such as Instant Messaging, Push e-mail, VoIP or location based services tend to be electricity guzzlers. It so happens that applications that we want always to be reachable have to keep sending periodic keepalive messages to keep the NAT state active. Why is that so? The NAT has an inactivity timer whereby, if no data is sent from your mobile for a certain time interval, the public port will be assigned to another device.

You cannot blame the NAT for this inconvenience, after all, its role in live is to redistribute the same public addresses over and over; if it detects you stopped using the connection for a little while, too bad, you lose the routable address and it goes to someone else. And when a next burst of data communication comes, guess what? It doesn’t find you anymore. Just think of a situation we would loose our cell phone number every time it is not in use and get a new one reassigned each time.

Nokia carried out the original study. Good work Nokia researcher guys! Another way of looking at the saved energy, which I think we’d all vote for, is potentially longer battery life of our mobile access devices. I am sure the folks at Nortel, who are so enthusiastically driving the green agenda for competitive advantage, would be interested in this research, and quite honestly its one of the first arguments I have heard that makes me think ah yes IPv6 lets pull the trigger. There are some good skeptical arguments in the comments here, but on balance I can definitely see the value of the initial research. Its surely worth further study.

While writing this article I also came across the rather excellent Green IT/Broadband blog. The author Bill St. Arnaud clearly believes in our Bit Miles concept, even if he doesn’t call it that.

Governments around the world are wrestling with the challenge of how to reduce carbon dioxide emissions. The current preferred approaches are to impose “carbon” taxes and implement various forms of cap and trade or carbon offset systems. However another approach to help reduce carbon emission is to “reward” those who reduce their carbon footprint rather than imposing draconian taxes or dubious cap and trade systems. It is estimated that consumers control or influence over 60% of all CO2 emissions. As such, one possible reward system of trading “bits and bandwidth for carbon” is to provide homeowners with free fiber to the home or free wireless products and other electronic services such as ebooks and eMovies if they agree to pay a premium on their energy consumption which will encourage them to reduce emissions by turning down the thermostat or using public transportation. Not only does the consumer benefit, but this business model also provides new revenue opportunities for network operators, optical equipment manufacturers, and eCommerce application providers.

European IPv6 Day, hosted by the EU is on the 30th May. Come to think about it the guy I should talk to about green IP is Vint Cerf of Google.