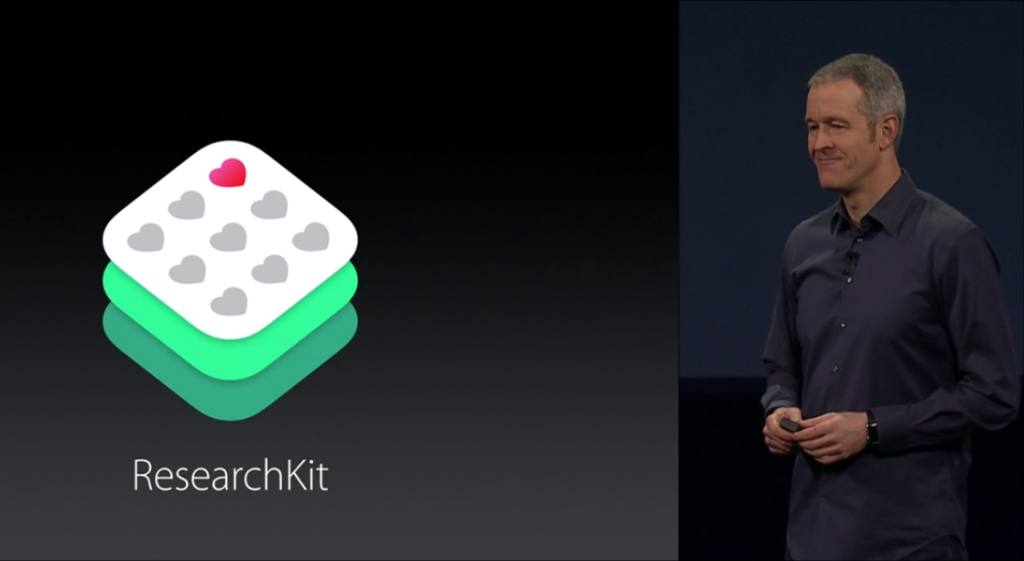 What is ResearchKit? Apple’s SVP of Operations, Jeff Williams, described it as a framework for medical researchers to create and deploy mobile apps which collect and share medical data from phone users (with their permission), and share it with the researchers.

Why is this important? Previously it has proven difficult for research organisations to secure volunteers for research studies, and the data collected from such studies is often collected, at best, quarterly.

With this program, Apple hopes to help researchers more easily attract volunteers, and collect their information far more frequently (up to once a second), yielding far richer data.

The platform itself launches next month, but already there are 5 apps available, targeting Parkinson’s, diabetes, heart disease, asthma, and breast cancer. These apps have been developed by medical research organisations, in conjunction with Apple.

The success of this approach can be seen already in this tweet:

After six hours we have 7406 people enrolled in our Parkinson's study. Largest one ever before was 1700 people. #ResearchKit

I downloaded mPower, the app for Parkinson’s to try it out, but for now, they are only signing up people who are based in the US.

As well as capturing data for the researchers, mPower also presents valuable information to the user, tracking gait and tremor, and seeing if they improve over time, when combined with increased exercise. So the app is a win both for the research organisations, and for the users too.

Apple went to great pains to stress that the user is in complete control over who gets to see the data. And Apple themselves doesn’t ever get to see your data.

This is obviously a direct shot at Google, and its advertising platform’s need to see your data. Expect to hear this mantra repeated more and more by Apple in future launches.

This focus on privacy, along with Apple’s aggressive stance on fixing security holes, and defaulting to encryption on its devices, is becoming a clear differentiator between Apple and Android (and let’s face it, in mobile, this is a two horse race, for now).

Finally, Williams concluded the launch by saying Apple wants ResearchKit on as many devices as possible. Consequently, Apple are going to make ResearchKit open source. It remains to see which open source license they will opt for.

But, open sourcing ResearckKit is a very important step, as it lends transparency to the privacy and security which Apple say is built-in, as well as validating Apple’s claim that they don’t see your data.

And it also opens ResearchKit up to other mobile platforms to use (Android, Windows, Blackberry), vastly increasing the potential pool of participants for medical research.

We have documented here on GreenMonk numerous times how Big Data, and analysis tools are revolutionising health care.

Now we are seeing mobile getting in on the action too. And how. 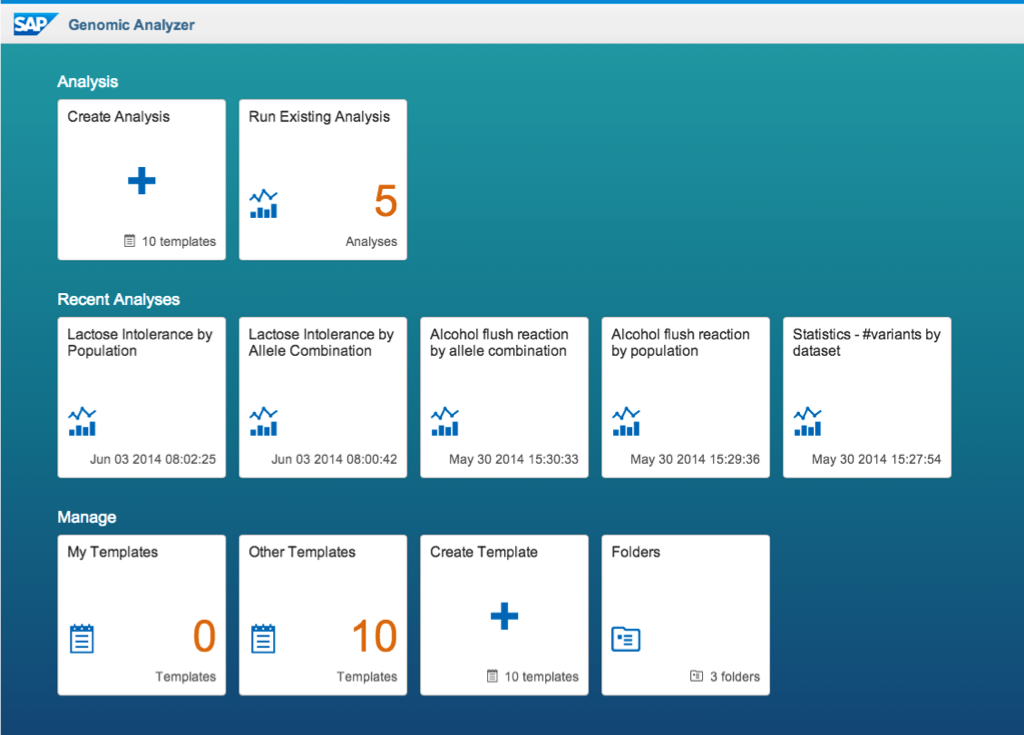 As we noted recently here on GreenMonk, technology is revolutionising the healthcare industry, and the pace of change is astounding with new products and services being announced daily.

We were recently given a demonstration of two products currently being developed by SAP (Genomic Analyzer, and Medical Research Insights), and they are very impressive products.

The Genomic Analyzer (pictured above) can take large numbers of genomes and interrogate them for various traits. This may sound trivial, but this is a serious Big Data problem. In a talk at SAP’s Sapphirenow conference in June, Stanford’s Carlos Bustamante outlined the scale of the issue when he noted that in sample size of 2534 genomes takes up 1.2tb of RAM and consists of over 20bn records.

The industry standard for storing genomic data is in a variant call format (VCF) text file. This is then interrogated using either open source or some specialised commercial software analyse the genomic data. Researchers frequently have to write their own scripts to parse the data, and the parsing takes a considerable amount of time. 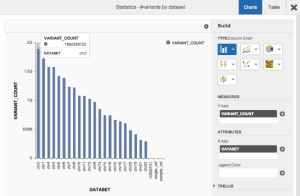 On the other hand, SAP’s Genomic Analyzer, because it is based on SAP’s in-memory database technology, can take record sets of 2,500 genomes in its stride returning multi-variant results in seconds. This will allow previously impossible tests to be run on genomic datasets, which opens up the potential for disease biomarker identification, population genetics studies, and personalised medicine.

SAP are actively looking for research partners to work with them on the development of the Genomic Analyzer. Partners would typically be research institutions, and they would receive login access to the analyzer (it is cloud delivered), and the ability to create and run as many query sets as they wish.

SAP’s Medical Research Insights application again takes advantage of SAP’s Hana in-memory database to take in the vast swathes of medical data which would typically be housed in siloed data warehouses (EMR’s, scans, pathology reports, chemo info, radio info, biobank system, and so on). It can be used to quickly identify patients suitable for drug trials, for example or to surface new research when relevant to patients.

The Medical Research Insights solution is currently being developed as part of a co-innovation project with a large cancer institute in Germany, but will ultimately be applicable to any hospital or medical institution with large disparate data banks it needs to consolidate and query.

SAP are far from alone in this field. As well as developing innovative medical applications themselves, many in their Startup Focus program are also furiously innovating in this field, as previously noted.

Outside of the SAP ecosystem, IBM’s Watson cognitive computing engine is also tackling important healthcare issues. And like SAP, IBM have turned Watson onto a platform, opening it up to external developers, crowdsourcing the innovation, to see what they will develop.

The main difference between IBM’s cognitive computing approach, and SAP’s Hana in-memory database is that Watson analyses and interprets the results on behalf of the researchers, whereas Hana delivers just the data, leaving the evaluation in the hands of the doctors.

And news out today shows that Google is launching its Google X project, Baseline Study so as not to be left out of the running in this space.

There’s still a lot of work to be done, but the advances these technologies are starting to unlock with change the healthcare industry irreversibly for the good.

Welcome to episode eighteen of the Technology for Good hangout. In this week’s episode we had Loco2 product and UX manager Chris Adams as a guest on the show. Chris is an old friend, and semi-regular co-host, so we had a lot of fun discussing this week’s crop of stories. Though I tried to whittle them down to a manageable number we still had quite a things to talk about, particularly in the energy, transport, and health spaces.

Here are the stories that we discussed in this week’s show: 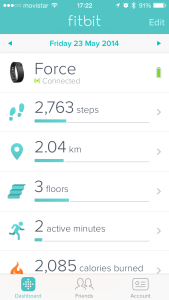