I had a nice catch-up call with Mike Holt the other day – Mike is Semitech Semiconductor’s VP Sales and Marketing and we had previously talked last August.

Power line communications is receiving a lot of interest these days because of the current buzz (bad pun, sorry) around Smart Grids. Every smart meter is, by definition, connected to an electricity distribution network – if this network can be used to send and receive information, it saves having to roll out a separate infrastructure for your smart grid communications.

During our call, Mike made me aware of a number of bits of Semitech news (they’ve expanded their sales team, they had new product announcements and they closed a new funding round) but by far the more interesting part of the chat, for me, was when Mike started to tell me of the new markets that are expressing an interest in PLC.

According to Mike, there is now a growing interest in PLC coming from the urban lighting sector to help with maintenance and control of lighting. Mike gave me the example of Munich. Apparently there are five people employed in the city whose job it is to drive around the city at night spotting burnt out lights – with a PLC solution, you can receive an automatic notification as soon as your sodium lamps burn out and you get early indications that an LED is about to burn out allowing you to switch it out before it goes dark.

LED’s by themselves save large amounts of money (this is very important when urban lighting makes up to 40% of a cities energy budget) but, as we reported last year, LED’s when they are connected to an intelligent control system can save up to 87% on energy costs!

Other new markets for power line communications Mike mentioned were for remote management of solar panels on remote solar farms and seemingly there is a growing interest in PLC in the home automation field – which makes a lot of sense too.

Power line communications is not without its challenges – electrical networks can be ‘noisy’ and be prone to attenuation but as companies like Semitech become better at dealing with those issues, it is going to be fascinating to see just where PLC takes us. 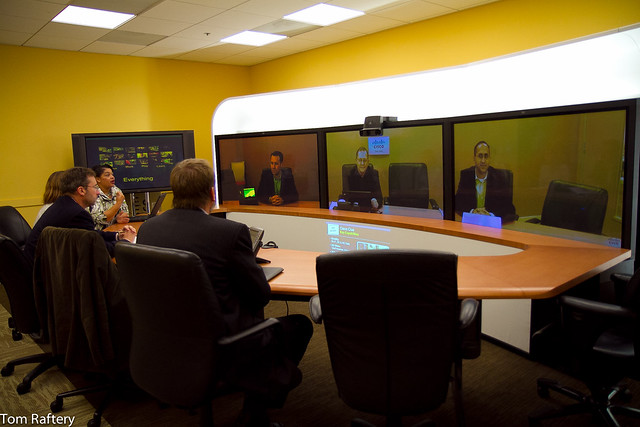 As mentioned previously, I was in Santa Clara and Palo Alto last week for a couple of SAP events.

At these events SAP shared some of its carbon reduction policies and strategies.

According to SAP Chief Sustainability Officer Peter Graf, the greatest bang for buck SAP is achieving comes from the deployment of telepresence suites. With video conferencing technologies SAP is saving ?655 per ton of CO2 saved. This is hardly surprising given Cisco themselves claim to have saved $790m in travel expenditure from their telepresence deployments!

Other initiatives SAP mentioned were the installation of 650 solar panels on the roof of building 2 which provides for around 5-6% of SAP’s Palo Alto energy needs. This means that on sunny days, the SAP Palo Alto data centre can go completely off-grid. The power from the solar panels is not converted to AC at any point – instead it is fed directly into the data centre as DC – thereby avoiding the normal losses incurred in the conversion from DC->AC->DC for computer equipment. Partnerships with OSISoft and Sentilla ensure that their data centre runs at optimum efficiency.

SAP also rolled out 337 LED lighting systems. These replaced fluorescent lighting tubes and because the replacement LED lights are extremely long-life, as well as low energy, there are savings on maintenance as well as electricity consumption.

In its entirety, SAP has invested $2.3m in energy efficiency projects at their Palo Alto campus. This will lead to $665,000 savings per annum with a payback in under four years and an annual CO2 emissions reduction of over 807 tons.

This may sound like small potatoes but SAP intends to be both an exemplar and an enabler – so they want to be able to ‘walk the walk, as well as talking the talk’.

One of the points that SAP constantly mention in briefings is that while their CO2 emissions amounted to 425,000 tons for 2009, the CO2 emissions of their customer base, associated with their running SAP software is 100 times that and the total CO2 emissions of their customer base is 100 times that again! Consequently SAP sees itself as potentially having sway over a large portion of the world’s carbon emissions. SAP hopes to be able to use this influence to help its client companies to significantly reduce their emissions – and to use its software to report on those same reductions!

Two questions I forgot to ask SAP on the day were: