EDSA are an interesting company. They are 25 years old, they are privately held and they focus on power analytics. I had an opportunity to have EDSA’s CTO, Kevin Meagher, on the show so I jumped at it to find out more about their smart grid solutions for micro-grid integration.

Kevin and I had a great chat, we talked about:

I attended the 7th International SAP for Utilities event in Munich last week.

Having attended the SAP for Utilities event in San Antonio last year, I had reasonably high expectations from this conference and I wasn’t disappointed. At the San Antonio event SAP talked very much about the ‘State of the Now’ talking up their, then recently launched, Energy Capital Management software. At this event however, Head of SAP Service Industries, Klaus Heimann keynoted introducing SAP’s vision for the utility company of 2020!

In what was a very forward-looking address, Klaus confidently predicted that:

In two years time this will no longer be a Utilities conference, it will be en Energy conference

This must have had a lot of the people in the room squirming in their seats because, as Klaus himself said, “Utilities are not known as being good at change!”

But change they must.

Just a few of the upcoming major changes utility companies are going to have to cope with include the growing imperative to move to a greater penetration of renewables in the generation mix, the impending explosion in the numbers of electric vehicles to be charged, and the need to roll-out smart grids and take in distributed generation.

Klaus’ vision for the utility company of 2020 is summarised in the video interview I conducted with him above, but briefly he talked of an energy market vastly more complex than today’s. An energy market:

Nothing too earth-shattering in that list to be honest. But, when put against the types of changes utilities have gone through in the last 100 years, this is an enormous upheaval. This is probably a good time to be a change management consultant in the utilities sector 😉

For this vision to become real (and any utilities who don’t start to move in this direction can start writing their own obituaries now), there needs to be massive changes in utilities communications infrastructures and their data handling capabilities.

With big change, comes big opportunities so it is not surprising to see SAP are all over this and helping the utilities visualise where they need to go. 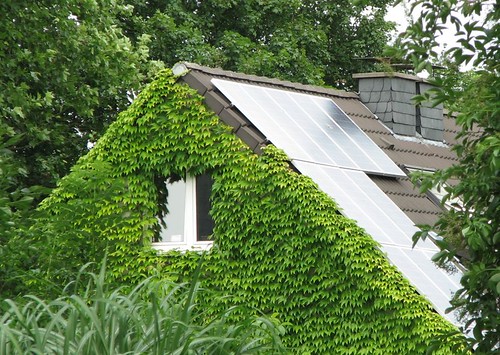 Microgeneration, the generation of electricity by home owners, is becoming increasingly common, especially with the cost of energy going up and the cost of wind turbines and photovoltaic panels for the home falling.

The majority of people deploying these solutions are doing so to 1) lower their home energy bills and 2) to help the environment.

What if I told you that often installing microgeneration equipment does not help the environment?

Bear with me while I try to explain. This is complex, counter-intuitive and I am not the world’s best communicator!

Grid operators have problems integrating renewable energy sources onto the grid right now because they are a variable source of supply. Couple that with the variability of demand and your grid starts to become increasingly unstable.

By far the most economic renewable energy source currently is wind but wind energy’s supply curve is often almost completely out of phase with demand (wind blows stronger at night when there is least demand for energy).

The more renewables that are brought onto the grid, the greater an issue this becomes with grid operators having to shut down production from wind farms in times of oversupply! Bear in mind also that there has to be enough generation capacity from non-wind sources (oil, gas, coal, nuclear, etc.) to pick up the slack on days when the wind doesn’t blow.

In times of oversupply from renewables, it would be far preferable to be ramping up consumption of energy using moveable loads, rather than shutting down production from renewables.

Now consider the home-owner who has deployed their own wind turbine. At times when the wind is blowing this home-owner is generating power thereby reducing their demand just when there is an oversupply on the grid! And if they have a net metering agreement with their utility, they further exacerbate the problem by pumping extra electricity into the grid, just when it isn’t required!

Conversely, on calm days, when extra energy is most needed, micro-generation contributes nothing.

There are two main problems:
1. There are no economic energy storage technologies currently available – though this situation is evolving rapidly with the ramping up of investment into battery research by the transportation industry in particular and
2. Real-time pricing data for electricity generation are not exposed to the consumer – if they were, and automated demand response mechanisms were put in place, you would see a radical shift in the energy consumption curve (people would consume energy when it was cheaper – i.e. when it is abundant).

If these two nuts were cracked i.e. economic energy storage mechanisms were available and real-time pricing data were exposed, micro-generators could generate energy when the wind blows, store it and then profitably sell it back to the grid when demand increases, or the wind drops.

For now though, while microgeneration may be beneficial in reducing your energy bills, it is of no benefit to the environment.

Note that I didn’t address CHP in this post because I was trying to keep things simple! CHP can be beneficial, as can any microgeneration, if the production of energy increases in line with the price of electricity.

As the price of electricity goes up, so too does its carbon footprint. If you consume electricity when it is cheap, you are facilitating the greater penetration of renewables onto the grid. If, as a micro-generator, you can produce clean power when electricity is expensive, then you are helping the environment.

UPDATE: Just to clarify, I fundamentally believe microgeneration is a good thing. However, given the current antiquated state of the grid in many countries, the disconnect between generation and demand profiles for wind particularly, and the lack of decent energy storage technologies, the environmental benefits of microgeneration are far from straightforward. This will change as energy storage options improve and demand response mechanisms and smart grids are deployed.