The plan is comprehensive and lays out several targets for the year 2020:

The announcement is a world first because emissions reductions targets from each sector of the UK economy are quantified and policies to achieve them are laid out. More significantly, the budgets are legally binding making the UK the first country in the world to write its carbon targets into law.

New funding for elec cars, recharging stations in up to six cities

Why only six cities? Surely this is something which should be rolled out nationwide as a single project. With vehicle to grid technologies this would even help the UK government increase the level of renewables on the grid helping meet the 40% low carbon emissions target (with less coal!).

As mentioned above, this target will be met by a combination of renewables, nuclear and coal (with CCS). The inclusion of both nuclear and coal in this figure is bad news. Coal is dirty for all kinds of reasons (coal fly ash slurry spill anyone? Coal ash contains arsenic, copper, barium, cadmium, chromium, lead, mercury, nickel, and thallium!) and the problems associated with storage of nuclear waste are well known.

Nice, but as @JamieAndrews pointed out, this just means that the timeframe has just grown longer!

It is not all negative though.

From next April, people can generate own power and feed back in to the grid for cash

are all superb announcements and will help the government reach its targets.

The full announcement is available for download but be warned it is a 228 page pdf behemoth!

In conclusion, this is a hugely important piece of legislation setting out for the first time anywhere legally binding CO2 emissions targets for all sectors of the UK. The policies to achieve them as laid out may not all be perfect (and in the case of continuing to use coal, very far from perfect) but these are just that, policies – they will change at the whim of whoever is in power at any time. The coal and nuclear lobbies are extremely well funded and have managed to inveigle their way into this document at policy level but their days are numbered.

The legally binding CO2 emissions targets will be far harder to change. 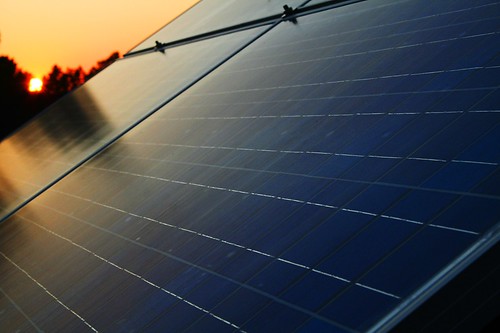 James and I had lunch the other day with Simon Wardley.

During the course of what turned out to be a wide-ranging discussion Simon brought up the topic of flexible solar panels. I was delighted to read today then that Xtreme Energetics and HP are teaming up to produce

According to the piece, XP will use thin-film, transparent transistors developed by HP which are made from readily available materials such as Zinc and Tin – which have the added advantage of not having environmental issues.

Within 24 months, the company will release roof panels integrated with HP’s technology to deliver dramatic energy gains at a comparable price point to conventional PV systems, Colin Williams, CEO of Xtreme Energetics said. “Our panels will be twice as efficient, we’ll be able to deliver a higher energy density, and customers will have the option of choosing a color.”

The fact that the electronics are transparent means that more light gets through and thus the efficiency is further improved.

If these are truly transparent, south-facing windows on buildings could have these applied without significant impact on light entering the building. Ten at times when most energy is needed (sunny days when the aircon is turned up to 11), these transparent PV walls are cranking out the power to cool the building.