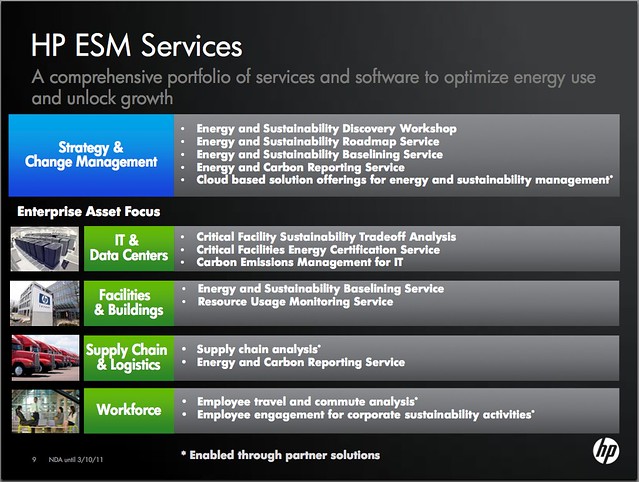 Above is a screenshot of one of the slides from HP’s webinar announcing their new Energy and Sustainability Management solution.

What is most interesting about it for me is that, front and center there is a focus on Facilities and Buildings. We have already seen that IBM has identified Smarter Buildings as one of the major planks of its Smarter Planet program, now with HP chasing this sector as well, we are likely to see some major improvements in global building stock’s energy efficiency in the coming years.

It is nice to see HP re-discovering its interest in sustainability especially, since former CEO Mark Hurd eviscerated any programs related to sustainability in HP during his tenure. As my colleague James noted, the real legacy L?o Apotheker, HP’s new CEO, left SAP (where he was formerly CEO) is SAP’s deep commitment to sustainability. It looks like he is bringing his sustainability stamp to HP as well, but I digress.

Smarter Buildings are obviously a big play what with buildings being responsible for anything up to 40% of the world?s energy use, and approximately 33% of the world?s greenhouse gas emissions ? and then there is the market size to consider ? every building on the planet potentially.

Though there is one qualification to that – I suspect in the cases of both HP and IBM, when they refer to Smarter Buildings, they are primarily referring to commercial real estate, not residential buildings. This is understandable, given that the commercial market is a far easier one to address – a single contract can be for hundreds of thousands of square feet of real estate, whereas the residential sector, by definition, is far more fragmented. However, according to the IPCC, the residential sector is responsible for 1,500MtC of carbon emissions compared to 1,000MtC for commercial buildings.

How do we square this circle?

Well, one player addressing precisely this market is Living PlanIT. In their model city in Portugal, they are creating residential buildings which are net energy positive! They are also creating a platform for the development of sustainable urban technologies and licensing them so they can be used globally. I spoke recently to Living PlanIT’s CEO recently about their plans and will be writing that up in a separate post.

However, the takeaway is that, while the commercial market is a hugely important one to address, it really is the low hanging fruit in terms of the global built environment’s energy footprint. We need to be actively chasing the residential space, at least as vigorously as the commercial one.

I want one of those cute energy dashboards IBM and HP are touting for my home. When we all have one of those, then we’ll have made some real progress.