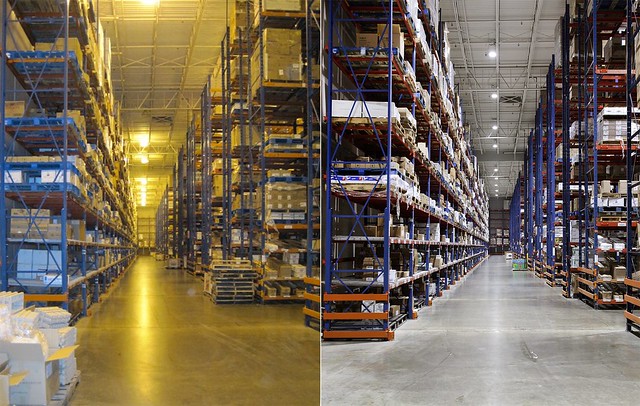 Digital Lumens reduced the cost of lighting for their first customer by 87%.

Digital Lumens specialise in high-bay lighting for warehouses, cold storage facilities, and manufacturing plants. This is a mostly invisible but very large segment. It is estimated that in the US alone, $5bn worth of lighting is sold into the supply chain sector every year.

Mike Feinstein, Digital Lumens’ VP of Sales and Marketing, told me on a recent call that they are very much a start-up company and that they have had their first revenues in this calendar year.

In a recent press release Digital Lumens reported that their first large-scale customer, Maines Paper & Food Service has reduced their energy requirements for lighting by 87% since installing the Digital Lumens lighting system. Up until now, Maines 500,000 sq ft (46,450 sq meters) warehouse was lit using sodium lights 24 x 7 and lighting costs made up around 20% of Maines total energy spend.

With the new system Maines expects to save 1,726,108kWh per year which, at a cost of US$0.0958 per kWh for industrial customers in New York, amounts to a $ saving of just over $165,000 per annum. This saving, combined with an incentive provided by the New York State Energy Research and Development Authority (NYSERDA), means that Maines will recoup the cost of this project in less than a year!

I was fascinated with this story so I spoke to Pat DeOrdio, the VP of Operations for Maines.

Pat told me that Maines were doing a full analysis of their lighting to see how “we could reduce our kW off the grid and help with our Green initiatives” when they came across the Digital Lumens solution.

For Pat, what was particularly compelling about the intelligent lighting system was the management software which came with it

“With Digital Lumen’s lights, every one of them is like a little computer. It has its own IP address so we are able to control that lighting level – if we want to have the light turn off in 30 seconds, 60 seconds or when nobody’s in the aisle, you know, why do you want it lit? It gives us the ability to control the light level from a computer and it reduces our energy cost”

Of course another big advantage of the LED lights is the fact that they give out so much less heat. This is particularly important in large cold rooms and freezers because it reduces the workload on the chillers cooling the rooms

Three other big advantages Pat cited to the Digital Lumens’ solution were that:

LED lighting is making huge strides now in commercial settings. When the Sentry Equipment Corporation in Oconomowoc, Wis., was considering how to light its new factory, it decided to go with LED’s. From the New York Times report on the building:

By lighting all of the building?s exterior and most of its interior with L.E.D.?s, Sentry spent $12,000 more than the $6,000 needed to light the facility with a mixture of incandescent and fluorescent bulbs. But using L.E.D.?s, the company is saving $7,000 a year in energy costs, will not need to change a bulb for 20 years and will recoup its additional investment in less than two years.

Kaj den Daas, chairman and chief executive of Philips Lighting, one of the largest manufacturers of lighting globally, in an interview two years ago said ?We are not spending one dollar on research and development for compact fluorescents.? Instead, the bulk of its R.& D. budget, which is 5.2 percent of the company?s global lighting revenue, is for L.E.D. research. Philips is betting the store on the L.E.D. bulbs, which it expects to represent 20 percent of its professional lighting revenue in two years.