I attended the 2011 DataCenterDynamics Converged conference in London recently and at it I chatted to a number of people in the data center industry about where the industry is going.

The first of these was Paul-François Cattier of Schneider Electric who talked about the need for standardisation of infrastructure in the data centers to speed up the time to build.

Tom Raftery: Hi everyone, welcome to GreenMonk TV. We’re at DCD London Converge and with me I have Paul-François Cattier, who is VP Data Center Solutions for Schneider Electric. Paul welcome to the show.

Tom Raftery: So Paul you guys made a bit of an announcement at the show here, can you talk to us a little bit about that?

Paul-François Cattier: Yes we announced what we call the way to bring the standardization and modular IT into data centre to bring energy efficiency in the data centre. So basically what we think is today’s data centre industry is still very immature in its infancy and we need to bring this with stage of maturity to be better efficient.

Tom Raftery: So tell me why do you think a modular infrastructure is better for data centres?

Paul-François Cattier: Most of the data centre today are designed as unique design. So each time it’s very long process to design data centre because it’s a unique design so you have 24 months, 20 months before you decide to do a data centre when you are coming to the completion of the data centre. So with the standardization you are using subsystems that are completely standardized, manufacture build, manufacture interested, respectable performance and you are using these bricks or these blocks or these Lego if you want of subsystems, standardized subsystems to build your data centre. 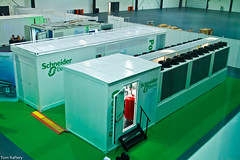 If doing this, you can really build your data centre in three to four months with optimized performance and ensure due to this standardization that the management that is needed to really tie the data centre physical infrastructure and its energy consumption to the effective IT of your data centre to be enabled in the data centre because as the data centre is very much in standardized module, it’s very easy to require this type of management system. So like if you want — if you would like to develop yourself, your GPS in your car, it will — you will spend maybe 20 years before being able to use your own GPS designed by you.

What you do is you share the R&D to have an excellent GPS system that is sold to many, many customer to spread out the cost. So this is what standardization and modularity will bring into the data centre world.

Paul-François Cattier: Well we have a long way to go. Today 80% of the new built data centre are still built in a very traditional way, that is totally inefficient in terms of CapEx use, in terms of OpEx use and in terms of energy efficiency, and you know that we are working in all the market, we are in Schneider Electric to bring energy efficiency into this market. And really we believe that the standardization in the modularity enables the management aspect of the challenge to be enabled, and — enabled to be enabled of course and allow this energy efficiency and when you save 1 kilowatt at the plug, you save most of the time 3 kilowatt as a generation plant.

Tom Raftery: Great. Well François that?s been fantastic, thanks for coming on the show. 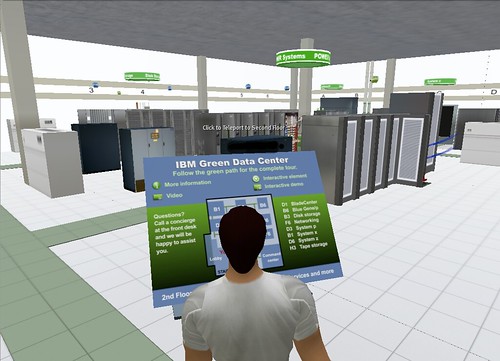 Speaking of data centers, I was delighted to read this morning of a partnership between IBM and Indian bank Kotak.

According to the release, IBM is helping the bank consolidate its server rooms into one data center and Kotak will save:

over US$1.2 million in operational efficiency and reduced energy costs over the next five years

I’d like to see some of the calcs behind those data – $1.2m over five years sounds low to me unless it is a modest data center.

Intriguingly, the release refers to:

a chilled water-based cooling and an automatic floor pressurization system

If that is water cooled servers (as opposed to water cooled air handling units) then this is nice. I’d love to know what an ” automatic floor pressurization system” system is. Anyone know? My guess is that it is something for maintaining underfloor airflow integrity but if it is that, then it sounds like traditional air cooled servers, not water cooled 🙁

Hello? Anyone from IBM have any more info on this?