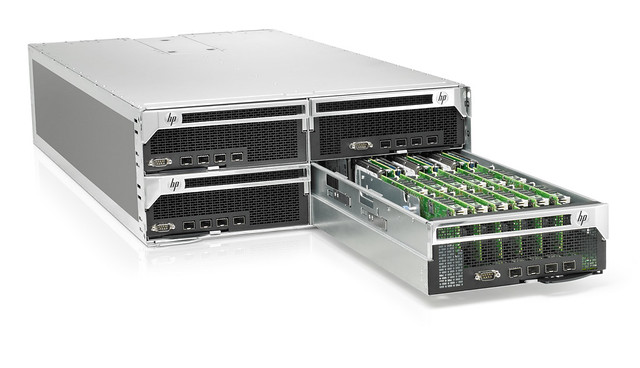 The machine in the photo above is HP’s newly announced Redstone server development platform.

Capable of fitting 288 servers into a 4U rack enclosure, it packs a lot of punch into a small space. The servers are System on a Chip based on Calxeda ARM processors but according to HP, future versions will include “Intel? Atom?-based processors as well as others”

These are not the kind of servers you deploy to host your blog and a couple of photos. No, these are the kinds of servers deployed by the literal shedload by hosting companies, or cloud companies to get the maximum performance for the minimum energy hit. This has very little to do with these companies developing a sudden green conscience, rather it is the rising energy costs of running server infrastructure that is the primary motivator here.

This announcement is part of a larger move by HP (called Project Moonshot), designed to advance HP’s position in the burgeoning low-energy server marketplace.

Nor is this anything very new or unique to HP. Dell have been producing microservers for over three years now. In June and July of this year (2011) they launched the 3rd generations of their AMD and Intel based PowerEdge microservers respectively.

And it’s not just Dell, Seamicro has been producing Atom-based microservers for several years now. Their latest server, the SM10000-64 contains 384 processors per system in a 10U chassis with a very low energy footprint.

And back in April of this year Facebook announced its Open Compute initiative to open-source the development of vanity free, low cost compute nodes (servers). These are based on Intel and AMD motherboards but don’t be surprised if there is a shift to Atom in Open Compute soon enough.

This move towards the use of more energy efficient server chips, along with the sharing of server resources (storage, networking, management, power and cooling) across potentially thousands of servers is a significant shift away from the traditional server architecture.

It will fundamentally change the cost of deploying and operating large cloud infrastructures. It will also drastically increase the compute resources available online but the one thing it won’t do, as we know from Jevons’ Paradox, is it won’t reduce the amount of energy used in IT. Paradoxically, it may even increase it!