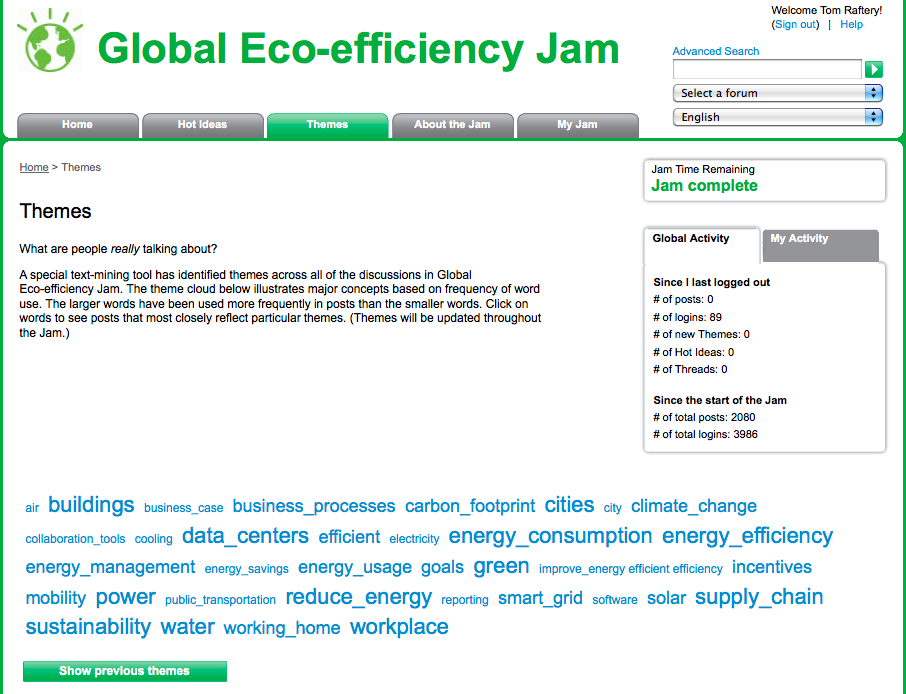 I mentioned previously that the quality of the participants in the jam was really impressive, but what were attendees most interested in talking about during the jam?

The screenshot above is a tag cloud of the themes discussed during the jam. And while it gives some idea of the relative importance of topics explored during the jam, I decided to see if I could dig a little deeper into the numbers.

Doing a View Source of this page tells me the pixel size of each of the terms – see below:

Unfortunately they only seem to fall into three sizes – 12px, 18px and 22px – so not hugely granular, still it is something.

Clicking on the tags to see the posts doesn’t give an immediate indication of why some are larger than others unfortunately. All of the 22px tags contain 10 posts but so do the 18px and the 12px! Nor does it appear to refer to the number of replies to posts.

It is equally unclear how the tags were arrived at in the first place, apart from this explanation on the site – “A special text-mining tool has identified themes across all of the discussions in Global Eco-efficiency Jam. The theme cloud below illustrates major concepts based on frequency of word use”.

When creating a new post, or replying to previous posts there was no option to tag your responses.

35 posts were identified as being “Hot Ideas” – no idea how or why they were identified as such. It appears to have been a manual process. The hot ideas which generated the most responses (those with >30 replies) were, in decreasing order:

Still, despite the lack of transparency around the process, it was an incredibly worthwhile event. I ended up contributing 45 posts (2% of the posts!) which received 46 responses. I learned loads and would definitely participate if IBM decide to hold another (hint, hint!).