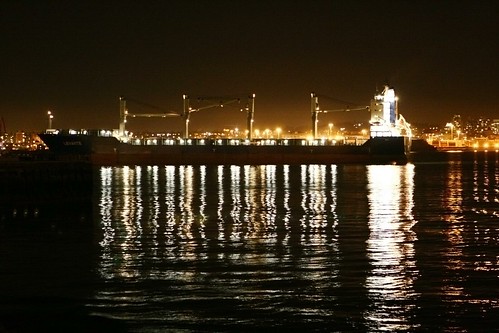 When the IT community talks about shipping bits it is referring to completing software and readying it for deployment. But there’s another way of thinking about shipping bits; if they are nothing more than silent streams of ones and zeros, why are we “shipping” them at all, when networks are a more natural transport mechanism?

According to Tim Lang (now Professor of Food Policy, City University, London), who is credited with inventing the term food miles:

“The point was to highlight the hidden ecological, social and economic consequences of food production to consumers in a simple way, one which had objective reality but also connotations.”

Could “bit miles” play a similar role for some other types of goods?

We send documentation, CD-roms and so on around the world, many of which are never even used. Transportation remains one of the biggest consumers of carbon fuels and emitters of greenhouse gases. The concept of food miles is now increasingly well understood in Europe, although the idea appears to be slower in catching on elsewhere. America, the home of the petrodollar, is so far pretty much immune to the idea of food miles. “Cheap” at the point of consumption guides pretty much everything in American (and economic) life. According to the National Sustainable Agriculture Information Service “the vast majority of energy used in the U.S. food system (around 80 percent) goes to processing, packaging, transporting, storing, and preparing food. Produce in the U.S. travels, on average, 1300 – 2000 miles from farm to consumer.”

Food miles considers the distance food travels to get to your table, treating costs associated with transportation not as economic externalities, for others to worry about, but instead as inherent to the sustainable supply chain. In this view of the world, if your apples have been shipped from Chile to London, they almost certainly aren’t “cheap”, even if they are low cost. The Soil Association, the UK authority for organic certification, is even considering denying the label “organic” to foods that have travelled long distances.

Food miles thinking attempts to reexamines the fundamental economics of logistics. Its not just the basic distances that food travels before it reaches you. there are also the “cheap” trips, such as sending vegetables picked in the UK to be processed in China, before being shipped back to the UK for supermarket retail.

I think we can usefully reappropriate the term – to talk about “bit miles”. So much of the logistics of the IT industry is effectively wastage. How much documentation is printed, and shipped across the world, only to be obsolete months later?

The Long Tail is Green

Bit miles thinking isn’t confined to IT. Any industry that involves needless transport of information that could be digitised should perhaps be subject to the dread Carbon Added Tax. We ship bits in all kinds of industries. Think of the music industry, so long addicted to the inventory of little plastic discs, black for most of the 20th century, iridescent for the end of the period. When Wired editor Chris Anderson first started looking at Long Tail businesses he didn’t have green thinking in mind. But by assiduously researching and laying out the economics of abundance through digitisation in his ground breaking book he could indirectly have done green lobbies a huge favour. A key Long Tail insight is that abundance doesn’t necessarily mean waste. When the inventory is digital it can be infinite.

Books are a really tough one for me. I love books and places where books live. The smell of bookshops is better than any buttered scone (although these days the smell has been ruined in many cases with an overpowering aroma of coffee). Are books high or low carbon? Paper potentially means high carbon costs (shipping and possibly deforestation). Or is it low carbon (a book costs next to nothing to archive). I am not coming down on one side or another at this point, but eventually I want something like a Kindle. And yes I realise a book reader has potentially high manufacturing cost.

Why replace paper? Because digital living could be better. I want to be able to markup books as easily I can web sites. I want a del.icio.us that works seamlessly for books I read, so I can share textual notes with people (note to Microsoft, a more liberal approach to DRM would massively help your battle to win Yahoo. Hearts and minds).

The High Cost of Digital Abundance?

When I first suggested the idea of bit miles to Rob Bernard, Microsoft’s chief environmental strategist, last week he just nodded and went on to the next topic. As far as Rob is concerned, its important to make data centers more efficient, but we must be careful not to forget the breakthroughs they can enable. But others are not so sure. When I suggested the idea on Twitter a couple of days ago I got some pushback.

Thus for example, when I suggested tape should have a role in digital storage because of its lower power consumption than disk, Jeremiah Stone argued that tape is still needed data center cooling. I don’t remember saying we should do away with data centers 😉 Others argued that I was perhaps simply discounting data center costs when considering bit miles, replacing one simplicity with another. That argument has some weight. There is also a strong lobby that argues classic market economics is the only sensible mechanism for resource allocation. I get that. Another argument, recalling the Long Tail, said that providing abundant digital services increased demand, thus negating the value of network delivered services.

But according to recent estimates (which annoyingly now can’t find online) IT currently consumes around 3% of carbon worldwide. Transport meanwhile is nearer 20%. It would seem to me valuable to tackle the 20% as much if not more than the 3%. We need to deliver breakthrough, rather than incremental, savings in global supply chains. As Bernard says: “We can’t just save our way out of trouble.” We need to fundamentally rethink many approaches to transport, architecture and manufacturing. IT is an important cost to consider, but we need to gouge, not shave, costs from how we live now. Only IT will help us deliver those breakthroughs. We can’t turn our back on IT any more than we can turn our back on eating.

What Do We Do Now?

The paperless office is a pretty empty phrase, but we really need to start putting it into practice. Better still: what about a paperless planet? Seriously – wikis are now proven best practice for documentation. Any company that isn’t digitising its documentation, and enabling a wide company to build it, is throwing good money away.

Bit miles aren’t anti-technology. On the contrary reducing bit-miles only makes sense in the light of the beautiful, ground-breaking inventions that technology enables. My outlook is as sunny as it can be, but I want my son to enjoy snowfalls. If companies start to consider the bottom line and potential customer advantages of a strategy to reduce bit miles he may just see a few.

“Atoms cost more to move than electrons, and i can move photons even more cheaply.”