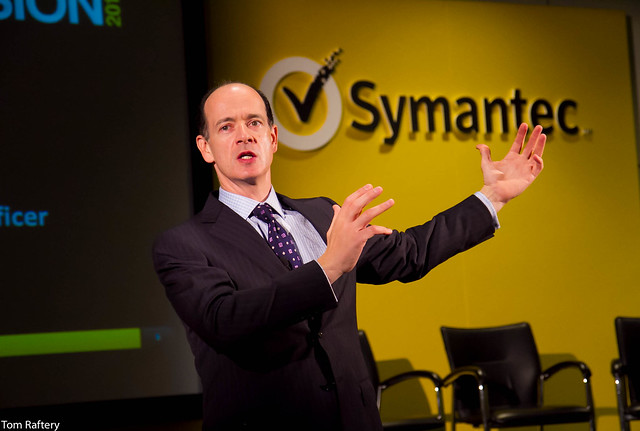 I attended Symantec’s Vision 2010 event in Barcelona yesterday and I found it to be hugely frustrating!

At yesterday’s Vision event however, they missed lots of great opportunities to talk up their Green story! I sat through the keynote from CEO Enrique Salem and presentations from the business unit leads and there was not one mention of the word Sustainability or even Green. 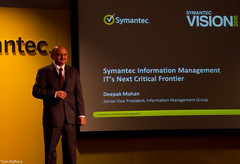 Things improved considerably in the afternoon when Fujitsu, a Symantec customer, spoke about the payback from installing a hosted email filtering solution from Symantec. Before the installation, Fujitsu were receiving in excess of 2m emails per day. Between 90-95% of these emails were spam. After the rollout of the email filtering solution, Fujitsu are now receiving 5-10% of their previous email load per day. As a consequence they were able to reduce their email infrastructure from sixteen servers down to two. Furthermore, they were able to reduce their network link requirements and their storage requirements for email. And finally they were able to free up IT resources who previously were tasked with managing the email infrastructure. This is a big Green win! 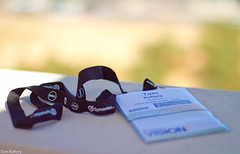 Later in the afternoon I was especially heartened to have a one-to-one session with Symantec VP of Global Solutions, Jose Iglesias. Jose is the guy raising/waving the Green flag within Symantec. He informed me that Symantec have used their own technologies to reduce the electricity bill in their data centers by $3m (10%) per annum!

How do they do this?
Symantec has software for helping manage computer clusters which can help you reduce the number of computers in a cluster without affecting your SLA’s.

Also, according to Jose, storage costs can represent between 25-75% of a data center’s energy spend. To help with this Symantec have storage management products which give deep visibility of use of storage. This can highlight overallocation, help reclaim storage space and defer the purchase of new storage.

Other technologies like dynamic storage tiering can significantly reduce the amount of energy used in storage while data deduplication can free up large amounts of disk space.

Finally, Symantec see a large role for themselves in helping secure the Smart Grid.

With all these Green credentials, why aren’t Symantec screaming their Sustainability story from the rooftops?

Possibly because they don’t see it as core to their customers’ needs. That is changing. Fast.

Another good reason for Symantec to strt talking up their Green credentials is that companies with a good record on Sustainability have an easier time attracting and retaining employees – something which is vital to the long-term sustainability of any company. 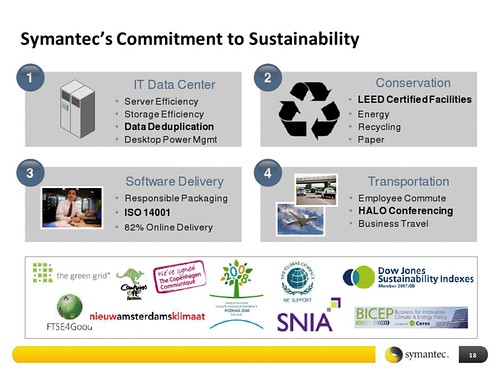 I was lucky enough recently to meet Jose Iglesias, the guy spearheading Symantec’s sustainability efforts. I wrote the interview up over on Monkchips, but much of the content belongs here too. I like Symantec’s clear focus on energy. While others are broadening their sustainability story, Symantec is doubling down on managing energy more effectively, with a plan to take its expertise in reducing IT power consumption and start applying it to broader Smart Grid demand response.

Symantec?s Green IT story is very much an enterprise play and arguably a solid sustainability product strategy could help to increase visibility for some of Symantec?s enterprise tools. Thus for example ? Symantec NetBackup PureDisk for storage deduplication could be used to cut the amount of storage and power. One challenge for Symantec is identifying and serving the new buyers in energy reduction. Most of the firm?s traditional practitioner purchasers are not tasked with reducing the energy footprint of the products they manage?.

?We sell to admins, but few get compensated on energy savings?

To which I would say? not yet.

One major opportunity for Symantec to change the account management game there is to parlay its IT experience directly into related spaces such as Smart Grid security and asset management. I knew before the briefing that Symantec is having some early success in the Smart Grid market selling, for example, cryptography. Security is a major issue overhanging smart grid and remains a key selling point.

I am not a fan of FUD though it certainly works. But let?s get real. In Europe for example we?re getting all excited about the need for smart grid standards to prevent tampering with our energy supply. Yet Russia could turn off a gas tap and we?d be screwed within weeks, no smart grid required. Whichever way you look at it ? energy reduction is going to be very big business indeed. The tail is starting to wag the dog.

So Symantec has plenty of potential upside in Green IT near term, and smart grids longer term. If you’re interested in learning more about the company’s efforts and products in energy efficiency check out the Monkchips post, which also talk to the fact the firm needs to improve its sustainability reporting in order to have a stronger voice in the sustainability conversation. I know many of you are CSR reporting nuts… 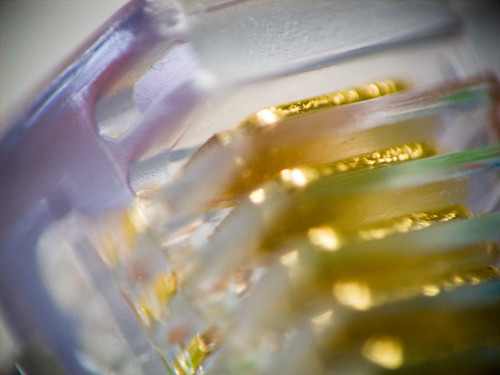