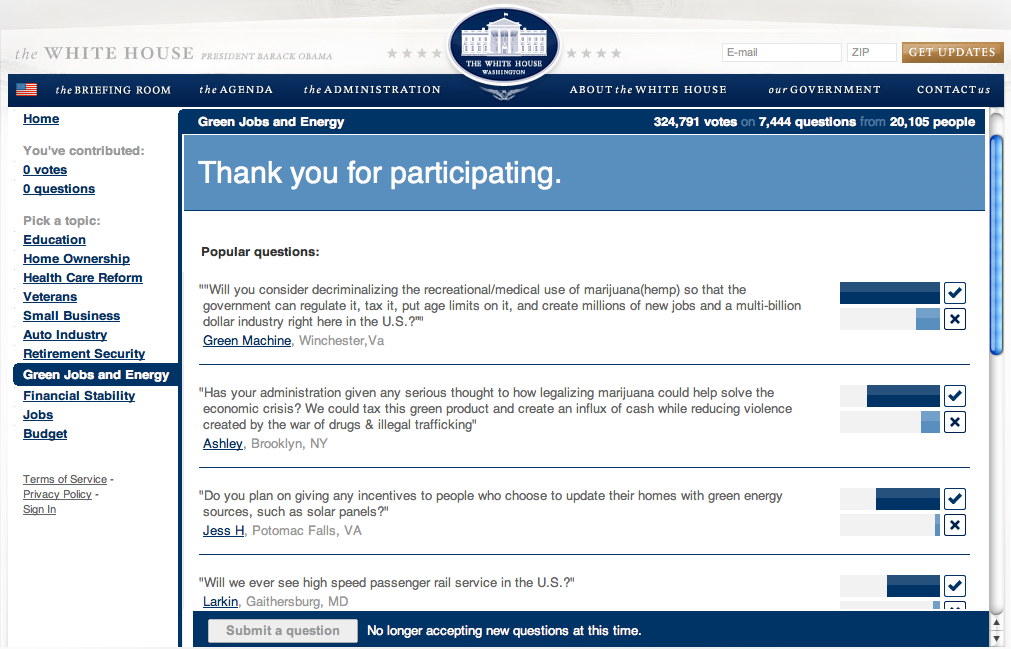 President Obama hosted an interesting experiment yesterday. On his Open For Questions site, he requested people to submit questions to him and vote on submitted questions. Subsequently, in a special online Town Hall, he answered several of the most popular questions – fabulous stuff.

However, despite hurricane Katrina devastating New Orleans, one of the US’s best known cities and now Fargo and many parts of North Dakota under threat of 43 foot floods, the top two questions in the Green Jobs and Energy category were related to legalising marijuana, not climate. Wtf?

Unbelievable, to me at least.

I used to think Jonathon Porritt, founder director of Forum for the Future and chair of the UK’s Sustainable Development Commission, was being a bit extreme when he said:

I have occasionally fantasised about a low mortality-count scenario where a Force Six hurricane takes out Miami, but with plenty of warning so the entire city is evacuated with zero loss of life. The insurance industry in America would collapse because this could be a $50-60 billion climate-related ‘natural’ disaster. The industry wouldn’t be able to cope with that. There would be knock-on pain throughout the global economy, massive, traumatic dislocation. This would act as enough of an injection of physical reality, coupled with financial consequences for leaders to say: ‘Ok, we’ve got it now. This isn’t just about some nasty effects on poor countries: this is devastating for our entire model of progress.’ The response to that would be a negotiated transition towards a very low-carbon global economy that builds increased prosperity for people in more equitable and sustainable ways.

But, unfortunately now, I’m not even sure that’d do it.