Facebook announced at the end of last week new way to report PUE and WUE for its datacenters.

This comes hot on the heels of ebay’s announcement of its Digital Service Efficiency dashboard – a single-screen reporting the cost, performance and environmental impact of customer buy and sell transactions on ebay.

These dashboards are a big step forward in terms of making data centers more transparent about the resources they are consuming. And about the efficiency, or otherwise, of the data centers. 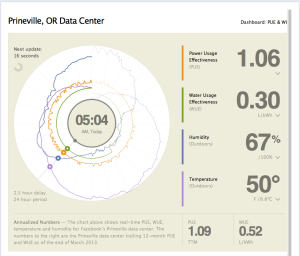 There are a number of important differences between the two dashboards, however.

ebay pulls ahead on the environmental front because it reports its Carbon Usage Effeftiveness (CUE) in its dashboard, whereas Facebook completely ignores this vital metric. As we’ve said here before, CUE is a far better metric for measuring how green your data center is.

Facebook does get some points for reporting its carbon footprint elsewhere, but not for these data centers. This was obviously decided at some point in the design of its dashboards, and one has to wonder why.

The last big difference between the two is in how they are trying to get their dashboards more widely used. Facebook say they will submit the code for theirs to the Opencompute repository on Github. ebay, on the other hand, launched theirs at the Green Grid Forum 2013 in Santa Clara. They also published a PDF solution paper, which is a handy backgrounder, but nothing like the equivalent of dropping your code into Github.

The two companies could learn a lot from each other on how to improve their current dashboard implementations, but more importantly, so could the rest of the industry.

What are IBM, SAP, Amazon, and the other cloud providers doing to provide these kinds of dashboards for their users? GreenQloud has had this for their users for ages, now Facebook and ebay have zoomed past them too. When Facebook contributes oits codebase to Github, then the cloud companies will have one less excuse. 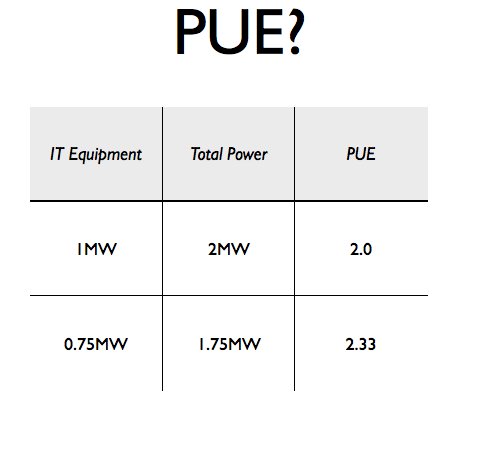 Power Usage Effectiveness (PUE) is a widely used metric which is supposed to measure how efficient data centers are. It is the unit of data center efficiency regularly quoted by all the industry players (Facebook, Google, Microsoft, etc.).
However, despite it’s widespread usage, it is a very poor measure of data center energy efficiency or of a data center’s Green credentials.

Consider the example above (which I first saw espoused here) – in the first row, a typical data center has a total draw of 2MW of electricity for the entire facility. Of which 1MW goes to the IT equipment (servers, storage and networking equipment). This results in a PUE of 2.0.

If the data center owner then goes on an efficiency drive and reduces the IT equipment energy draw by 0.25MW (by turning off old servers, virtualising, etc.), then the total draw drops to 1.75MW (ignoring any reduced requirement for cooling from the lower IT draw). This causes the PUE to increase to 2.33.

When lower PUE’s are considered better (1.0 is the theoretical max), this is a ludicrous situation.

Then, consider that not alone is PUE a poor indicator of an data center’s energy efficiency, it is also a terrible indicator of how Green a data center is as Romonet’s Liam Newcombe points out. 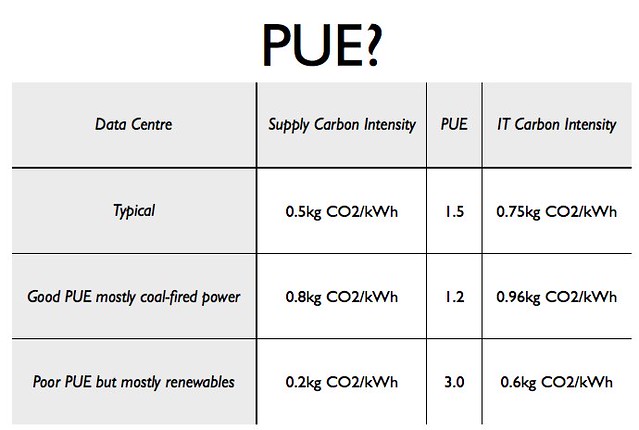 Consider the example above – in the first row, a typical data center with a PUE of 1.5 uses an average energy supplier with a carbon intensity of 0.5kg CO2/kWh resulting in carbon emissions of 0.75kg CO2/kWh for the IT equipment.

On the other hand look at the situation with a data center with a poor PUE of 3.0. If their energy supplier uses a lot of renewables (and/or nuclear) in their generation mix they could easily have a carbon intensity of 0.2kg CO2/kWh or lower. With 0.2 the IT equipment’s carbon emissions are 0.6kg CO2/kWh.

Now, how to make these the standard measures for all data centers?

The images above are from the slides I used in the recent talk I gave on Cloud Computing’s Green Potential at a Green IT conference in Athens.