We attended the SAP TechEd && d-code events recently. One of the more interesting parts of the showfloor was the Internet of Things (IoT) area. In this area there were demos of Internet of Things technologies currently in use by the likes of port of Hamburg, SK Solutions intelligent crane solutions (of which, we’ll be publishing a video in a subsequent post), and Internet connected vending machines, amongst other displays.

Even more interesting than the demos though was the IoT hacking area. In this area, SAP staff worked to create interesting Internet of Things connected devices, and there were machines available with Arduino, Tessel, and Beaglebone microcontrollers and instructions on how to connect them to sensors, pull data from the sensors, and push that data up to the Hana Cloud Platform.

In the Las Vegas event the SAP staff created the scarecrow seen in the video above. This scarecrow would flash the LEDs in its eyes, move its head, move its arms, and fire a Nerf gun when commanded to do so over Twitter. In the slo-mo video above, it does all the actions at once. Apologies for the quality of the video, it was shot using a smartphone lying prone on the floor.

We spoke to SAP’s Craig Cmehil subsequently to get hints on how to start out learning about hacking Internet of Things projects at home and he supplied us with a list of resources.

Craig recommended getting started with one of the following kits:

While for Raspberry Pi there’s

The links above are direct links to these items on Amazon, and there are many more accessories available on the Sparkfun site.

Not sure what the differences are between an Arduino and a Raspberry Pi? Check out this great explainer on Read Write Web.

Now, having decided on your IoT platform, what about some good resources, well, 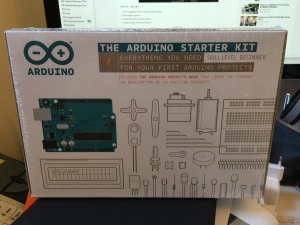 And if you are wondering about connecting these devices to the cloud, Rui Nogueira has a great two piece blog post with detailed instructions for Raspberry Pi here.

If hacking microcontrollers is your thing, or you think it could be, then our ThingMonk event next week in the UK is the place to be. It is a three day event with day one being hacking, day two is IoT tech talks, and day three (called Business of IoT) is business related IoT talks.