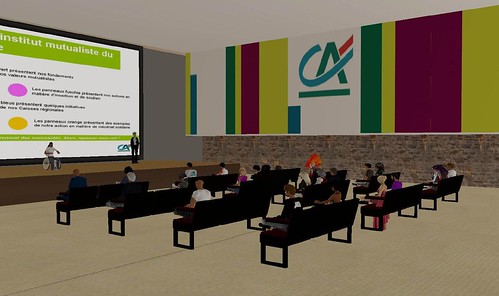 Virtual Worlds such as Second Life are largely dismissed as trivial and a waste of time by many people (myself included until recently!).

However a recent conversation with Pierre-Olivier Carles changed all that for me. Pierre is the co-founder and CEO of Stonefield Inworld – a company which builds things for people in virtual worlds.

In a pilot program rolled out for a small part of the group, Crédit Agricole expect to save between €200,000 and €300,000 this year on travel expenses alone by holding training sessions in-world. If this is rolled out to the group, annual savings would be in the order of €5-€6m. I’m not sure what that is in terms of reduced CO2 emissions but you can take it that it is a pretty big number!

And that is just in travel expenses. When companies start to be taxed for their carbon emissions, the savings from holding in-world training will be even greater.

Of course, the success of something like this is all in the execution and from talking to Pierre-Olivier, Stonefield seem to have nailed it. They have audio (for the presenter), video, slideware, and whiteboards in the training room. They take ‘coffee’ breaks to allow for the networking which happens in ‘real’ training as well as the opportunities for one-on-one with the trainer (“what you said in there is all very well in theory but in the case of our org…”).

The trainees can even give feedback on their understanding of the topic by migrating to the green side of the room to indicate all is going well or moving to the red side to signal that they are falling behind. As someone who gives talks and has done training, this kind of trainee feedback is invaluable to the successful running of a class.

Then there is the added benefits to the trainee of not having to worry about getting through security, catching that plane, lost luggage, traffic jams, breakdowns or worse. Does anyone have any statistics on the number of employees lost to work-related travel accidents annually?

With travel making up such a large part of our global CO2 emissions and companies increasing requirements to upskill their employees on an ongoing basis, initiatives like this are going to be vital for cost efficiencies and reduced carbon footprints.