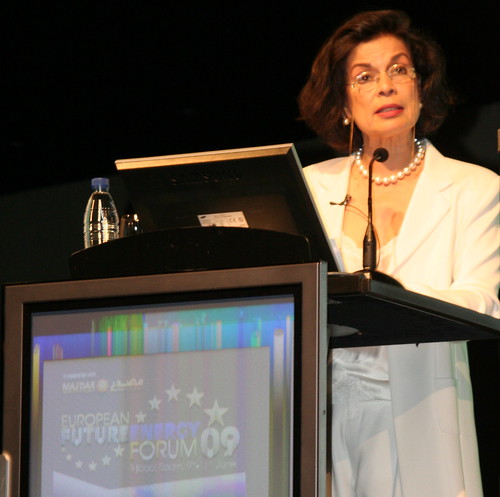 The first European Future Energy Forum kicked off this morning in Bilbao.

The opening session in the main auditorium was addressed by the Chair of the World Future Council, Bianca Jagger, the CEO of the Abu Dhabi Future Energy Company (ADFEC) which is mandated to undertake and drive the Masdar Initiative, Dr Sultan Ahmed Al Jaber, the president of the Basque Government, Mr Patxi López and the President of the Regional Government of Bizkaia (a province in the Basque country), Mr Jose Luis Bilbao.

For their part both Dr Sultan Ahmed Al Jaber and Bianca Jagger gave very interesting talks. Dr Jaber discussed his Masdar project and talked of how Abu Dhabi has had a paradigm shift from a fishing and subsistence nased economy to an oil based one and how it now needs to transition to one based on renewables. Coming from a country which has depended so heavily on oil for its income for so long, it is both heartening and a little disquieting to hear that Abu Dhabi is now looking to get into renewables. Can you say Peak Oil? Dr Jaber also made the case for the headquarters of the International Renewable Energy Agency (IRENA) to be based in Masdar.

Bianca Jagger, the Chair of the World Future Council, gave a hugely impressive, fact based and impassioned speech quoting variously and at ease from Nasa’s Jim Hansen, Nicholas Stern (author of the Stern Review, former Chief Economist and Senior Vice-President of the World Bank) and the reports of the IPCC. Ms Jagger aimed a broadside squarely at the nuclear industry whom she accused of Greenwashing by trying to pass themselves off as non-carbon emitting. Every stage of nuclear generation, from mining to dealing with the waste byproducts generates CO2, she said and nuclear energy emits significantly more CO2 than wind, solar or hydro. Ms Jagger also referenced the foundation of IRENA and emphasised its importance and she finished off asking if the 20% renewable energy by 2020 goals of the EU were going to be enough to avert a climate catastrophe.