IBM invited me to attend their Cloud and Mobile Conference InterConnect 2015 last week.

Because of what IBM has done globally to help people get access to safe water, to help with solar forecasting, and to help deliver better outcomes in healthcare, for example, I tend to have a very positive attitude towards IBM.

So I ventured to the conference with high hopes of what I was going to learn there. and for the most part I wasn’t disappointed. IBM had some very interesting announcements, more on which later.

However, there is one area where IBM has dropped the ball badly – their Cloud Services Division, Softlayer.

IBM have traditionally been a model corporate citizen when it comes to reporting and transparency. They publish annual Corporate Responsibility reports with environmental, energy and emissions data going all the way back to 2002.

However, as noted here previously, when it comes to cloud computing, IBM appear to be pursuing the Amazon model of radical opaqueness. They refuse to publish any data about the energy or emissions associated with their cloud computing platform. This is a retrograde step, and one they may come to regret.

Instead of blindly copying Amazon’s strategy of non-reporting, shouldn’t IBM be embracing the approach of their new best buddies Apple? Apple, fed up of being Greenpeace’d, and seemingly genuinely wanting to leave the world a better place, hired the former head of the EPA, Lisa Jackson to head up its environmental initiatives, and hasn’t looked back.

Apple’s reporting on its cloud infrastructure energy and emissions, on its supply chain [PDF], and on its products complete life cycle analysis, is second to none.

This was made more stark for me because while at InterConnect, I read IBM’s latest cloud announcement about their spending $1.2bn to develop 5 new SoftLayer data centres in the last four months. While I was reading that, I saw Apple’s announcement that they were spending €1.7bn to develop two fully renewably powered data centres in Europe, and I realised there was no mention whatsoever of renewables anywhere in the IBM announcement.

Even better than Apple though, are the Icelandic cloud computing company GreenQloud. GreenQloud host most of their infrastructure out of Iceland, (Iceland’s electricity is generated 100% by renewable sources – 70% hydro and 30% geothermal), and the remainder out of the Digital Fortress data center in Seattle, which runs on 95% renewable energy. Better again though, GreenQloud gives each customer a dashboard with the total energy that customer has consumed and the amount of CO2 they have saved.

This is the kind of cloud leadership you expect from a company with a long tradition of openness, and the big data and analytics chops that IBM has. Now this would be A New Way to Think for IBM.

But, it’s not all bad news, as I mentioned at the outset. 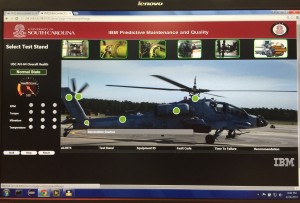 As you’d expect, there was a lot of talk at InterConnect about the Internet of Things (IoT). Chris O’Connor, IBM’s general manager of IoT, in IBM’s new IoT division, was keen to emphasise that despite the wild hype surrounding IoT at the moment, there’s a lot of business value to be had there too. There was a lot of talk about IBM’s Predictive Maintenance and Quality solutions, for example, which are a natural outcome of IBM’s IoT initiatives. IBM has been doing IoT for years, it just hasn’t always called it that.

And when you combine IBM’s deep expertise in Energy and Utilities, with its knowledge of IoT, you have an opportunity to create truly Smart Grids, not to mention the opportunities around connected cities.

In fact, IoT plays right into the instrumented, interconnected and intelligent Smarter Planet mantra that IBM has been talking for some time now, so I’m excited to see where IBM go with this.

Disclosure – IBM paid my travel and accommodation for me to attend InterConnect.