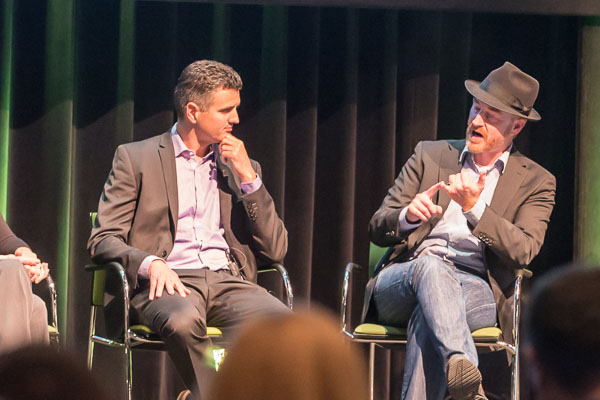 GE held their annual International Digital Energy Software Summit in Rotterdam this year. They asked me to speak on a panel titled “The Grid of Tomorrow… the challenge of integrating renewables and distributed generation on the grid“. One of the reasons they invited me to present is because of the many posts I have written, and talks I have given on what I have termed Electricity 2.0 over the years.

The Electricity 2.0 vision I have espoused is one where, to help balance the grid and enable greater penetration of renewables onto it, in-home appliances would listen to realtime energy price signals from the grid and adjust their behaviour accordingly. They would come on at times of low demand, and reduce their consumption at times of high demand.

Obviously not all loads in the home are movable. If you have your evening meal at 8pm every night, you are not going to change that just because there’s a higher load on the grid. However, many in-home loads are eminently movable. Washing/drying of clothes, or dishes, for example; heating water in an immersion too is generally movable, as can be aircon or cooling fridges/freezers.

When I first started talking about these possibilities in 2006, it seemed a fantastical, impossible notion. But now that we’re in 2014, the Internet of Things is well established, and I can control the lights in my home from anywhere in the world using my phone, that dream is now a lot closer to being realised.

One company, almost uniquely in a position to deliver on that vision is GE, given that they manufacture everything from wind turbines, to sub-stations, all the way down to the appliances in the home which need to respond to grid signals.

During the panel discussion we talked about many aspects of smart grids, the utilities rolling them out, and the regulations which they are bound by. We also went into some detail on the newer technologies that are emerging, particularly as they pertained to electric vehicles, vehicle to grid, and storage in general.

And finally the panel felt that utilities will need to be far more open to change than they traditionally have been. The markets are changing, customers are changing, and the technologies are changing. Utilities are extremely risk averse and therefore slow to change, however the risk for utilities now is if they don’t move with the times, they’ll be left behind.

This conclusion was confirmed by two data points this week:

Electric utilities… are seen by many investors as a sturdy and defensive subset of the investment grade universe. Over the next few years, however, we believe that a confluence of declining cost trends in distributed solar photovoltaic (PV) power generation and residential-scale power storage is likely to disrupt the status quo. Based on our analysis, the cost of solar + storage for residential consumers of electricity is already competitive with the price of utility grid power in Hawaii. Of the other major markets, California could follow in 2017, New York and Arizona in 2018, and many other states soon after.

In the 100+ year history of the electric utility industry, there has never before been a truly cost-competitive substitute available for grid power. We believe that solar + storage could reconfigure the organization and regulation of the electric power business over the coming decade. We see near-term risks to credit from regulators and utilities falling behind the solar + storage adoption curve and long-term risks from a comprehensive re-imagining of the role utilities play in providing electric power.