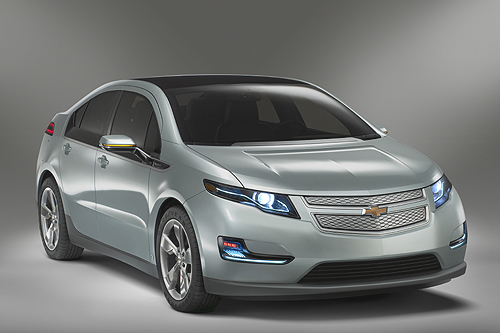 My guest on this podcast is Greg Cesiel. Greg is the Program Director for the Chevrolet Volt. The Chevrolet Volt is an electric vehicle from General Motors, expected to begin hitting showrooms in the US in 2010.

From the Wikipedia entry:

The company has avoided the use of the term “hybrid,” preferring to call it an electric vehicle with a “range extender” (“extended range electric vehicle” or EREV), due to its design.

The vehicle is designed to run purely on electricity from on-board batteries for up to 40 miles (64 km)… a large enough distance to cover the daily commutes of 75% of Americans, which averages around 33 miles (53 km). With the use of a small internal combustion engine driving a generator to power the electric motor, the vehicle’s range is potentially increased to 360 miles (579 km) on the highway (and which can be extended for very long trips by conventional refueling).

There was tremendous interest in this podcast. I mentioned on Twitter that I was going to be interviewing Greg and I received over a dozen questions in under 30 minutes!

Here are the questions I asked Greg and the approx. times I asked them:

Can you give us a bit of background on the Chevrolet Volt? It is what you guys are calling an extended range electric vehicle, is that correct? – 00:15
You guys targeted getting 40 miles from the battery because this takes in most people’s daily commute, is that correct? – 01:08
Of course, those kinds of calculations vary wildly with your local price of electricity and petrol… – 02:05
One of the great things about electric vehicles is that they become more Green as more renewables are added to the grid (and older non-renewables are retired)… – 02:50

rodney rumford
Ask them what the life expectancy of the battery is? How many years before total replacement? – 3:37

How does battery performance vary with ambient temperatures? – 04:26

rodney rumford
How is the software coming along for determining when the mini-engine needs to kick in before i make it to homebase? – 05:39

Do you have a release date for when people will be able to get their hands on a Volt? – 06:35

Sebastian
How much is the car? 07:30
How will they communicate to customers that the range is actually totally matching their needs, overcoming the fear that they might not have enough range? Imagine they sell a lot of these cars, will the sudden overnight need for power be actually a positive thing for power stations, balancing their load? – 08:23

John Keyes
I wonder are they doing any research into cleaner batteries? 10:46

Existing battery technologies are quite nasty in terms their environmental impact on destruction but lithium ion appears to be more environmentally friendly… – 12:00

Jonathan Kash
1. The Volt has tremendous long-term value for both GM and the industry, but from what I understand the margins will be very slim. Given the state of liquidity in the market, do you see the program being put on hold? – 13:35

2. The electric/range extender is a fantastic concept: however, what about people that live in urban areas? Have there been any thoughts on how residents of a large city (with very few personal garages) might be able to successfully use this platform? – 14:34

Bob Lutz mentioned last September that there would be a version of the Volt with solar panels on the roof, is that still on the cards, ‘cos they’d work well here in Seville!? – 16:04

James Britton
what other electric vehicles are planned? – 16:34
Ate you planning a plugin hybrid? Are you striving for 100 percent electric and/or hybrid electric engines? – 17:53

Questions related to this:

1 – is this true? if so, did this change happen during the R&D phase (and why if so?), or did the press originally mis-read the concept. Has the system – as proposed in the current car, always been proposed to work this way? – 19:06
2 – how efficient is the car when running on just the petrol engine, (ie, once the batteries are exhausted)? Wouldn’t a current production car, with a small petrol engine directly driving a crank/drive shaft be more efficient, because it wouldn’t have the added weight of the batteries? – 22:09

Second point is, I’m really interested to know more about how the interface works – GM have said that the car will actively manage the batteries, and know how to be most efficient, by knowing when it’s close to home/a charging point etc. Can they explain a little more about this. It sounds clever, but fraught with issues and complexities. Will the car come with an on-board, and up-datable database of charging stations in its computer system? – 24:06

Is the software integrated with some kind of GPS system, and you tell it where you are going, or is it just guessing based on the erergy levels in the battery versus what is in the tank? – 25:38

Jim Hughes
This is a Euro-centric view, but are there plans for a diesel rather than petrol version? – 26:09

Also was a rotary (wankel) engine considered for the petrol engine? – 26:49

Phoebe Bright
Are then thinking hot-swappable all electric cars in the future, and if so what are the technology implications, and if not, why not? – 27:07

I saw a report on the GM-Volt site where Shai Agassi of Project Better Place said:

the Volt is a $20,000 car that will cost $40,000. It will be a niche product. we want to make electric cars a mass market thing, and the only way to do that is to make it cheaper than driving a regular car.

What about the lithium battery supplies? This is an entire new marketplace you are creating, are you confident that you will have enough supplies to meet the amount of cars you are hoping to sell? 29:19

Phoebe Bright
What are the assumptions around oil price that are being used by Chevy for their business planning? – 29:57

Gina Porreco
Is there any plan for battery disposal? While electric vehicles are by far a better choice for the environment, they create the potential for a huge hazardous waste problem. – 30:39

John Peavoy
What other “green” or environmentally friendly materials and/or production processes are being used in the car and its production? Are GM investigating new materials & processes either as part of this program or other programs in the future? – 31:30

Joseph Simpson
I reckon that GM can probably get away with charging around £25,000 for the Volt in the UK. Why? Because a Prius costs around £20k, and I’d predict the Volt will appeal a lot to early adopters, people who ‘want’ an *electric* car, and people who look at the price of fuel, and can see the cost saving potential. But more than £25k puts you well into BMW/Merc territory – and am not sure people would be willing to pay more than that for a Chevy.

So – how do-able is this? Are GM confident they can price the car around this mark, sell enough of them, and make money? – 32:40

dripfeed
ask them to quantify the full environmental impact of actually manufacturing and recycling the car. For example, parts for the Toyota Prius are shipped and re-shipped from all over the planet and I, as a potential consumer, remain unconvinced that the Prius damages our environment less over its lifetime than a conventional car. – 34:09

Will there be software and a software interface there for selling electricity back to the grid in times of high demand so that, if your vehicle takes off, it can act as a buffer against variability of supply and demand from renewables. Is that something you are considering? – 35:28