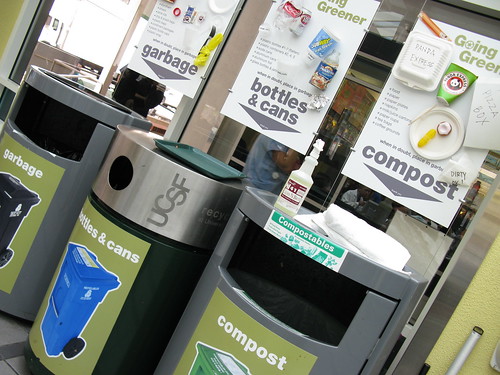 Microsoft have been doing some work at a corporate level in an attempt to Green the company. According to this announcement (nasty pdf warning!), Microsoft’s foodservice at its Redmond campus has become the first corporate campus in the United States to meet the Green Restaurant Association’s Certified Green Restaurant™ standards.

I must admit I hadn’t heard of the Green Restaurant Association until I read this release and was pleasantly surprised to find that they have a search function on their site which allows you to find certified Green restaurants in your area (if you live in the US). I’m not aware of any equivalent European organisation 🙁

To achieve the Certified Green Restaurant status Microsoft is:

replacing plastic and Styrofoam™ cups, plates and eating utensils with biodegradable cafeteria and kitchen accessories; expanding its full-scale recycling program; and implementing a waste composting program. Microsoft is sending all of its kitchen scraps and compostable items to Cedar Grove Composting of Seattle and has reduced waste in its kitchens by 50 percent since the inception of the compostable program

Microsoft is even sending its 833 gallons of used fryer oil to biodiesel refineries every month for recycling into biodiesel fuel.

To keep this certification, Microsoft needs to implement four new environmental steps per year for the next five years. To that end, from the Microsoft blog entry about this

Microsoft and the GRA have identified the following improvements for 2009.

Kudos to Microsoft for this achievement.

Microsoft also recently released a free power management tool for computers called Edison in conjunction with Verdiem. Edison allows you to simply set your computer to go to low power mode after a period of inactivity which you can set. You can also create schedules based around your working day and have Edison’s settings vary according to your work hours. Finally, Edison reports the amount of power you have saved.

This all sounds nice but as Edison is PC only and my computer is a Mac, I can’t comment on how effective it is. In fairness to Microsoft, Edison is Verdiem’s software and Verdiem appear to have decided not to support the Mac – however, it is unfortunate that Microsoft chose to partner with Verdiem and not someone like Bigfix which has power management software for Mac and PC .