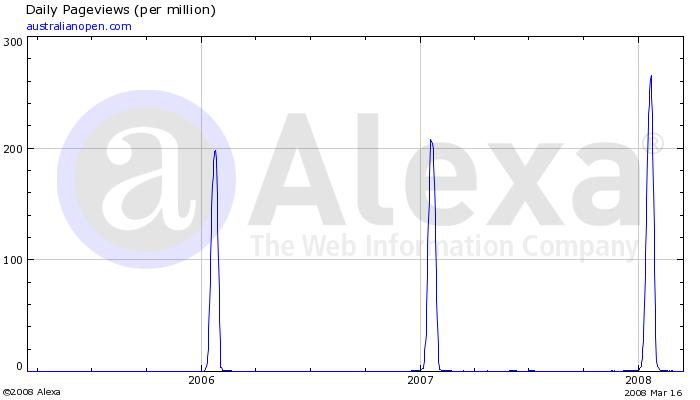 This is a graph of traffic to the website of the Australian Open tennis championship. As you can see, the traffic spikes in January every year and then all but disappears for the other 11 months of the year. It is also important to note that the height of the traffic spike is increasing year on year.

If the owners of this site want to be able to serve all the traffic at the top peak of the peak, they can spend a fortune on servers capable of handling that level of traffic but these servers will be almost entirely idle for eleven months of the year. The alternative is that the owners put the site on a cloud platform and dial up the resources associated with it, as and when needed. This is obviously a vastly more efficient option for the site owners. However, that doesn’t mean that cloud computing itself is Green or efficient.

For cloud computing to be efficient, the individual servers need to be doing more work than they would be doing if not in a cloud infrastructure. The main cloud providers include Amazon, Google, IBM and more recently, Microsoft. As far as I know, none of these companies are providing utilisation data per unit, so it is not possible to know just how efficient cloud computing actually is.

There is another consideration. There are a number of start-ups who say that they couldn’t have built their infrastructure if it wasn’t for cloud i.e. theirs is additional consumption which wouldn’t haven’t existed without the cloud. Does this newly facilitated consumption mean that cloud computing is less Green?

And without usage data from the cloud providers will we ever truly know if cloud computing is Green?