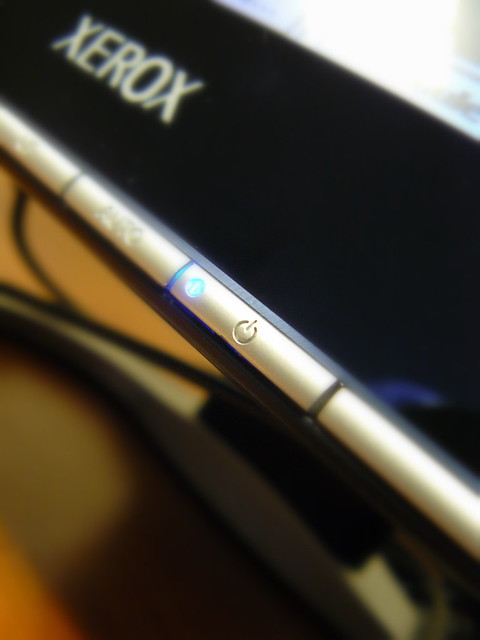 I had a phone call recently with Patty Calkins. Patty is Vice President of Environmental Health & Safety for Xerox Corp. I knew Xerox had a good environmental record but until talking to Patty, I had no idea just how good!

To put this in context, let’s take a quick look at how long they have been thinking about their environmental impact, as a company –

Given such a stellar record, I shouldn’t have been surprised at how seriously they take sustainability at Xerox, but I was. Why? The phone call with Patty was incredibly information dense but I’ll try to sum up some of Xerox sustainability highlights.

Most organisations have far more print capability than they need and the print devices they have have an average utilisation rate of around 1-2%. The rest of the time, they are still drawing power, requiing maintenance, etc. To help organisations with this issue, Xerox works with their clients advising them how best to replace stand-alone fax machines, printers and copiers with shared multi-function devices. Xerox took it a step further and developed their Sustainability Calculator – which allows companies to do before and after scenarios to see potential savings and also to subsequently qualify savings from ‘right-sizing’ their print infrastructure. 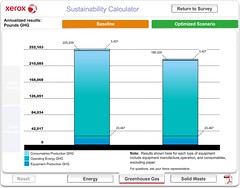 Again on the customer saving front, Xerox developed solid ink technology. This is where they supply ink for printers in solid waxy cubes. The ink melts in special wells in the printer and can then be printed onto paper. The advantage of the solid ink technology is there are no ink-jet cartridges, or laser toner cartridges to dispose of/recycle, and less packaging, transport and storage. In fact, solid ink generatres 90% less waste than laser cartridges. Over the product?s entire life, it actually consumes roughly 30% less overall energy and Earth?s resources than an equivalent color laser printer according to this peer reviewed report [PDF] on the lifecycle impact of solid ink.

Then around five years ago Xerox decided to take a step back to re-examine its aims and to see what is the ‘next plateau’ to reach for in this space.

Xerox mapped it’s complete environmental footprint, identified the significant environmental aspects, went out and tested it against various stakeholders, processed the data and organised it into newer sustainability framework which now consists of 4 planks (with associated goals):

According to Patty, Xerox have (funded by the Xerox foundation) spent millions on research into preserving the world’s biodiversity and turning that research into action in partnership with The Nature Conservancy.

And Xerox have been extensively researching the health impacts of human exposure to toner for the last 30 years. Perhaps unsurprisingly given it is Xerox they say it is not harmful – the difference here though is that they can back up this claim with peer reviewed studies on over 30,000 people over 30 years. Hard to argue with that!

The kind of commitment to sustainability which Xerox demonstrates is very rare. It should be the norm. Hopefully the more Xerox tell their story, the more they will inspire others to shine too.