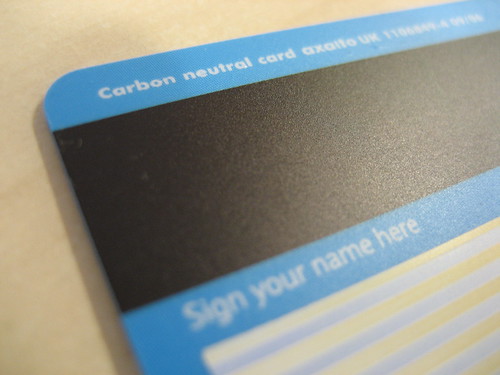 Barclays Bank and technology provider HP have just signed a deal to roll out new cooling technology at Barclays’ new Gloucester data center. According to the press release

• Reduce CO2 emissions by 20 per cent by 2010 (using 2000 as the baseline year)
• Reduce carbon intensity from 16.8 tonnes to 12.9 tonnes CO2 per £m of UK income(using 2005 baseline.) Carbon intensity is a measure of emissions relative to business growth and it allows comparisons to be made between companies.
• Reduce energy consumption in offices and branches by 20 per cent per employee (FTE) (using 2005 as the baseline)

The data center is as good a place as any to start, but it would be interesting to hear more about Barclays energy efficiency plans for its large real estate portfolio.  I also think its a shame that Barclays isn’t putting a pounds sterling figure on potential savings. To be a beacon for others it needs to translate the technical gubbins and low carbon talk into simple bottom line improvements. Shouldn’t be that hard for a bank. On the other hand of course, your carbon mileage may vary (that is, energy prices will certainly change).

According to Greenbang the big Wall Street investment banks, in conjunction with a number of energy companies, have also made some useful progress in establishing best practices for energy investment with a Carbon Principles scheme.

This effort is the first time a group of banks has come together and consulted with power companies and environmental groups to develop a process for understanding carbon risk around power sector investments needed to meet future economic growth and the needs of consumers for reliable and affordable energy.

JPMorgan, one of the banks involved, this week made its own bold gamble in carbon trading, acquiring ClimateCare, a British company that pioneered carbon offsetting. According to the Guardian ClimateCare “makes reductions of greenhouse gases such as C02 on behalf of individuals and companies around the world, and invests in wind power, hydro power, biomass, human energy and cooking-stove projects in developing countries.”

Like many others I am very skeptical of current approaches to offsetting. The idea that I can fly as much as I want as long as I later pay my absolution: “It’s not just about confession and saying my Hail Marys.” That said, its clear that the mechanism businesses find most compelling, to the point of fetish, is that of the market. Markets are a religion for some people, and they are the people with money to invest. Carbon trading could end up defining business in the 21st Century in much the same way that oil consumption defined the 20th.  I am not alone – according to S2 Intelligence businesses will spend $595 billion by 2010 on systems to support green accounting (yet again thanks Greenbang). Or as Computerworld puts it Green IT spend to outstrip Y2K within two years.

Finally I would just like to say JPMorgan’s research arm should be strongly applauded for making some of its climate-related research publicly available, for example this study into Europe, airlines and climate change targets.As I have argued before wider access to solid information is key to better outcomes. Well done old blue blood Wall Street bank.

Regarding the photo above I had not heard of carbon neutral bank cards before- this one from Barclaycard. Thanks very much sh1mmer for allowing me to use the photo with a Creative Commons Attribution 2.0 license.